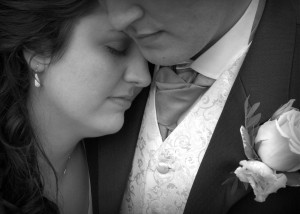 Our marathon week drew to a close at Brands Hatch Place on Sunday with our highly acclaimed SoundProof package, which had been nominated for the National Wedding Industry Awards just a few days before.

Julia and I arrived at Brands Hatch to cover the photography side of things with Rachael around midday where we found her in her hotel room with her sister (bridesmaid) and mum. There was a bit of nervous excitement going on but the bridal preps were very enjoyable and the bride a pleasure to work with. The disco side of things isn’t set up till after the meal at Brands Hatch Place so we took the opportunity to film our SoundProof package promo …during the day I was filming everything on one of our Canon’s whilst Julia captured all the documentary and formal shots. During the evening Julia did a bit of filming to cover the DJ side of things as well as taking photo’s through till the close at midnight.

Policeman Russell and the wedding party started to arrive shortly after 1pm, it wasn’t a huge wedding party I think between 60-70 with no additional evening guests but they proved to be an extremely relaxed and enjoyable group of people to be around from start till finish …following the bridal preps we took the opportunity to get some candid shots of the guests before grabbing a few minutes with Russell and his brother (best man) who had got married himself only last year.

Master of Ceremonies for the wedding was Barry Sims, I’ve worked with Barry quite a few times before and he is certainly one of the best in the business …because of his numerous previous visits to the venue he was more than happy to organise the wedding party with all the group shots and co ordinated the guests perfectly throughout the afternoon working seamlessly with ourselves and the venue, which always makes things flow nicely. Also alongside us for the day was videographer Oliver Kerby who we were very impressed with, he currently works for a production company but is about to go independent and well worth giving him a shout in your looking for a videographer, he was a pleasure to work with and captured every moment using a high quality kit.

As the ceremony got underway we were about to witness the first of several memorable moments that occured during the day, interestingly all conjured up by laid back Russell. It all began as the ceremony reached it’s conclusion with Russell repeating the registrars words whilst gazing into his soon to be wifes eyes… 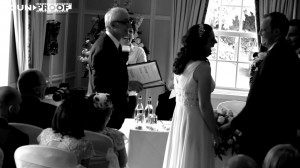 Russell congratulates Rachael on her choice of husband

Registrar to Russell: “I promise to respect and cherish you”

Russell to Rachael: “I promise to respect and cherish you”

Registrar to Russell: “And to be faithful always”

Russell to Rachael: “And to be faithful always”

Rachael was gobsmacked, the registrar completely thrown but it’s well worth watching on our promo video as it was a classic moment which brought about roars or laughter from the onlooking guests. I’m not sure if it was one of those inspired moments of off the cuff humour or Russell was just so transfixed by repeating the registrars words but whatever it was it was genius.

Following the ceremony the bride and groom had an extensive list of group shots which took place on the entrance steps to the venue including the confetti shower (as seen on the video), before we took the newleyweds off for a while to capture some personal shots from around the grounds at Brands Hatch. The wedding breakfast room at Brands is a lovely suite with mirrored walls, following an extremely nice meal we were back to capture the speeches. Russell’s second cracker of the day which brought the house down with laughter was as he explained that he had proposed to wife Rachael “in the car park near the cafe in Oxleas Woods at Shooters Hill” – if you typed in those words into a Google search engine it would direct you to the “Swinging Heaven” website – where you will find various quotes including ” Good couples dogging action here” and “Some couples having daytime affairs”, the roars of laughter from the wedding party indicated that they were very much more aware that Oxleas Woods is London’s number one dogging site than Russell was during the planning of his proposal, in his defence the couple come from nearby Welling and I’m sure this was just an oversight on Russell’s part as he pondered his moment of romance …and yes, Russell is a Policeman 😀 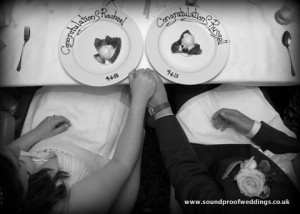 Brands Hatch Place offer a nice touch after the meal when they present the bride and groom with a decorated plate congratulating them, it’s not something I’ve seen at any other venue and is a nice additional photo opportunity, this then leads nicely into the final part of the daytime formalities which is the cutting of the cake. Rachael and Russell had organised cup cakes with a smaller cake for cutting before everyone vacated the room and gave me a chance to set up the evening disco.

Access is nice and easy for the disco through the side entrance tradesmen doors, this avoids the need to bring equipment actually through the hotel and we managed to get this all set up fairly quickly (including our famous arch trussing and uplighters to give the room a lovely pink backdrop for the evening). The room has a small bar in it which is really good and the buffet is served in a nearby adjacent room so everything is nice and near keeping everyone more or less together throughout the evening, which is important at the best of times but even more so with a slightly smaller wedding party and hotel exclusivity. 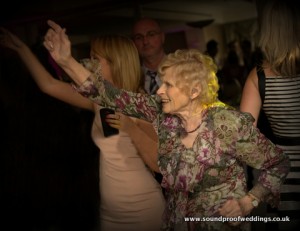 The evening went as seamlessly as the rest of the day …considering this was our sixth event since the previous Sunday if you get a great crowd you soon forget the tiredness, and this was a great crowd. Russell’s gran (in her 80’s I’m guessing) had been a star throughout the day and was still going strong throughout the evening as she became centre of attention during “Crazy in love” by Beyonce, another great moment of the day added to her earlier game of “kiss chase” with the Toastmaster during the group shots …during the ceremony she called out “thank you for a lovely ceremony” as the registrar was concluding matters and then during Russell’s Grandad’s speech she piped up right in the middle of it and reminded her husband that they had in fact been married for 58 years rather than the 50 he had just stated, she was a truly legendary wedding guest. But her enjoyment was far from over as Russell, family and friends saved the best for last. 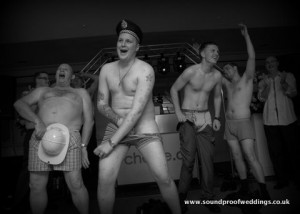 Something must have sent Russell over the edge during “Love Shack” about 45 minutes before the end of the night, as the usually mild mannered groom came up and demanded “Hot Stuff” as the next song. He was very insistant about this even pointing his finger as he emphasised it must be the next song …as instructed, I gave him his wish and as the song began to unfold in front of my beleaguered eyes …so did Russell’s clothing, and Russell’s dads, Russell’s brother and a couple of other male guests …yes for the first time in my career I was standing just a few feet away from five or six scantily clad men, in fact scantily clad is an understatement …never seen it done before, will probably never see it again, but in the jovial context of this wedding it was an inspired moment and brought the curtain down on a truly memorable day with a couple of great memories that neither of us are likely to forget in a very long time.

So very many congratulations to a genuinely lovely couple, I hope you (Rachael) enjoyed my account of your fab wedding day and that your not still blushing too much when you remember back to around 1115pm on the 9th June. All the best to you both for the future and we very much hope to see you both again one day.

Thursday we are at Preston Court for Rebecca & Robs wedding before next Saturdays gig performing with Stavros Flatley (Britains Got Talent 2009) …check back for those reviews very soon ! 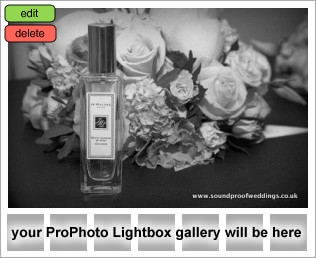