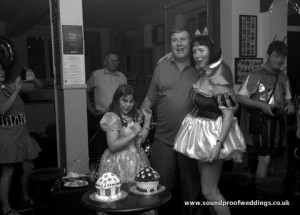 Old Wilsonians Cricket Club is a real old skool cricket club venue and perfect for keeping a small party of guests nice and tight for the evening. Fellow Charlton supporter Tim had been recommended to me from another fan who I had done some work for a couple of years ago …and this night proved to be the perfect tonic after a couple of rough days under the weather for me.

We arrived at Old Wilsonians at around 6pm, there was a cricket match taking place which brought back a few memories of my days playing Kent League cricket, when the DJ’ing really took off for me my cricket playing days were effectively over …but on a nice warm day it was nice to be back in  a cricket club environment once again. 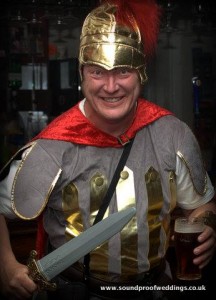 As a party venue it works really well, although its not the largest place by any means the staff were really down to earth, you get use of the kitchen for organising the buffet, the bar is right there at the heart of dance floor, there are some concertina doors that look out on to the playing field which can be closed or left open on a warm night. There’s a wooden floor thoughout the party area and a back area for laying out the buffet with chairs and tables, if there’s a cricket match on then the players get the use of the other side of the bar which is sectioned off. The disco sets up on a small carpeted area next to the bar which was just the perfect size really and we managed to get the arch, lighting, booth and speakers all on here without any problems. From a DJ perspective, access is very straight forward via a rear door straight into the room, use of haze/smoke isn’t an issue and there’s no sound limiter.

Guests for Tim and Ann’s joint 50th started to arrive around 730 …the majority of which were in fancy dress, in fact when I arrived Tim was doing his best impression of Clint Eastwood in his cowboy outfit with wife Ann dressed as a very daring Snow White, other guests included Betty and Wilma, a gangster, a gladiator, a rich looking arab and Scooby Doo amongst others. 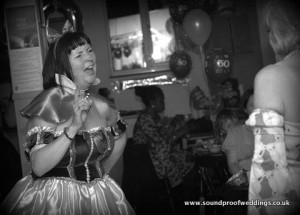 The evening was a typical 50th in terms of music with 70’s and 80’s being the predominant genres with a splash of Motown and Rock and Roll thrown in for good measure. At the outset I played background music from those eras as guests arrived and throughout the buffet, then as darkness fell around 10pm we closed the concertina doors and the party really kicked off, Tim who had mentioned earlier that he’s normally had enough by 10 was still going strong at the end and we finished the evening on a family song, Bryan Adams “Everything I do”.

A throughoughly enjoyable evening and a highly recommended venue if your looking for somewhere local at a good price. Tomorrow it’s onto Brands Hatch Place for Rachael & Russells wedding, they had actually won our SoundProof package in a wedding competition last year through Your Kent Wedding magazine, the usual review and photos to follow. 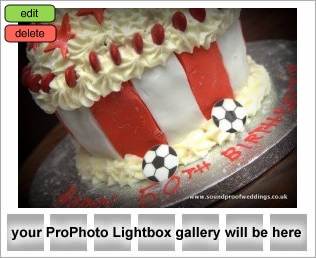