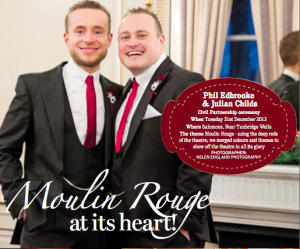 For one day, come what may …Salomons become the theatre of dreams as Phil & Julian celebrated their ‘Moulin Rouge’ style Civil Partnership on an extraordinary New Years Eve.

I’ve been involved in probably a thousand weddings over the past 10 years, but having now had time to reflect on this marathon day that started early for us on New Years Eve morning, it surely has to of been one of the most extravagant non celebrity weddings seen in Kent in 2013. 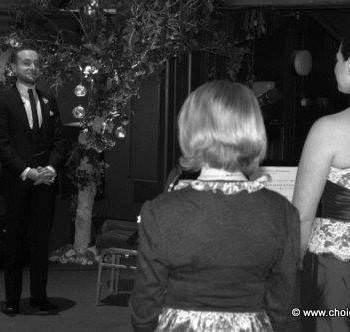 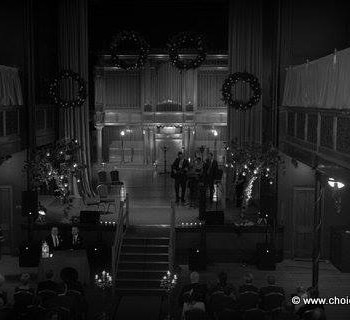 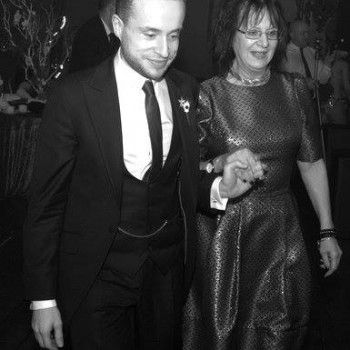 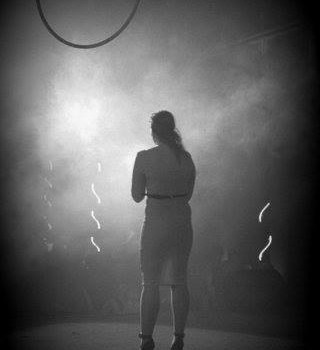 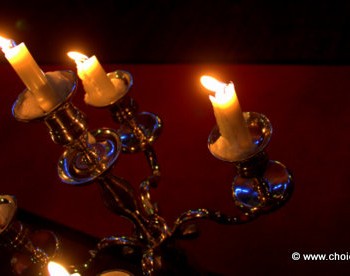 Phil’s brain had gone into overdrive in the final few months, everytime an email came through it just seemed to be getting bigger and bigger, I’ve never printed off so much information to take to work.

A year ago Phil booked me to DJ and provide 20 uplighters, however we ended up playing a major part providing the sound system for all aspects of the day which resulted in us getting a nice “Sound Production” credit in the cabaret programme. The theatre was built to sound great and it was an absolute joy to hear our fantastic 7000 watt surround sound system at its very best in the science theatre, usually we take a 2000-3000 watt system to the majority of weddings so it was huge by average wedding standards.

On reflection I felt honoured to of got this job, Phil had worked as a holiday rep in the clubs and has some background in entertainment so he must of really had faith in me and the sound system which was to be used for not only my 3 hour set between 10pm and 1am, but also to be used for Rachel Martin (vocalist specialising in Opera, Musicals, Jazz & Performance) and Indigo Stone featuring James Jarvis on lead vocals, both who were to play a pivotal role throughout the ceremony and the evening cabaret “One Night Only” before I played my DJ set from 10-1 into the 2014 to conclude the whole day.

I had met Phil around a year before to work with him on this project and we had met up a couple of weeks ago at a rehearsals session in Kent so I was very much involved with all his planning ideas and had built up a rapport over the course of time …however as the day dawned I was a bit worried for him as I really wanted him to be able to enjoy the day he had created rather than worry about everything running to plan …but everything ran like clockwork and I think Phil totally thrived on this experience. On the day never have I seen anyone look so genuinely happy which is what its all about and all that matters.

Myself and the other guys that worked on this loved every minute of it, yes there were stressful moments but these are the days that are the reason we work in the entertainment industry …and for Phil surely there’s still time for a career in event management.

Phil & Julian came back from their honeymoon in Thailand to discover that the wedding had been featured in a Kentish Ceremony magazine, which on reflection I think was fully deserved considering the lengths Phil & Julian went to to give so many people such a wonderful experience.

It’s hard to put everything into words that truly describe the drama of this day so I will leave the last words to Phil & Julian to explain how it all went for them, below is their thank you card and the feature in a Kentish Ceremony magazine along with some other links that they have very kindly shared with me.

What I can relate to and what I love the most about Phil is his attention to detail in everything he does, he’s a pure perfectionist and is the proverbial “if a jobs worth doing its worth doing well” …that is Phil to a tee, he loves life and has a smile to prove it. Congratulations to you both, you are a perfect couple. 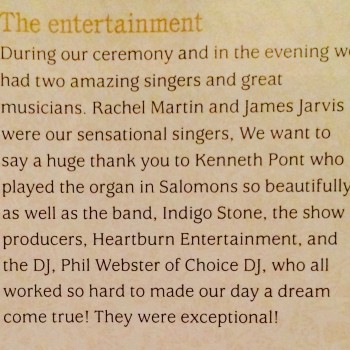 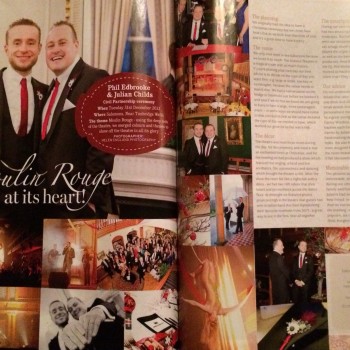 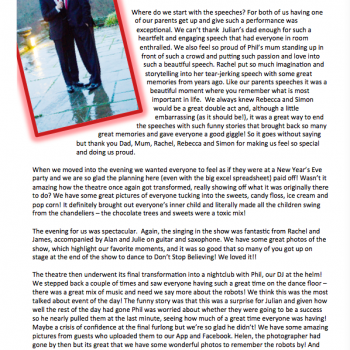 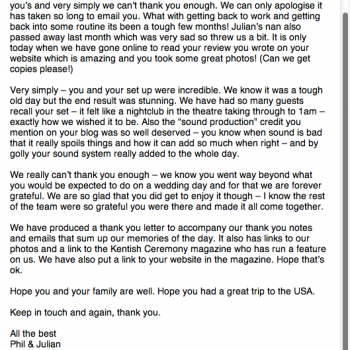