The penultimate wedding of September saw us make the journey up to Fanhams Hall in Ware for Nina & Lee’s wedding. I have played at the venue previously for a 40th Birthday a couple of years ago in the pillared room by the lake so this was my first chance to play in “The Great Hall” which is where the weddings are staged… 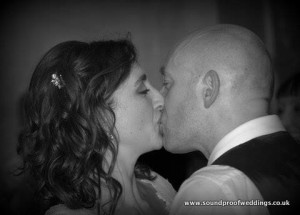 After an excellent journey up to the venue from the Dartford Crossing (there’s a sting in the tail coming up later), we arrived nice and early at Fanhams Hall around 715. Nina had booked the Creative Mood lighting package for the evening, however we couldn’t set up before the meal for this one as the disco sets up in a recess in front of the fireplace where the top table is situated during the wedding breakfast, so it meant everything was to be set up during the room turnaround time at 815.

On our arrival we quickly met up with the event co ordinator, but with the wedding running around 30 minutes late we didn’t get into the Great Hall following the speeches till around 845. Access couldn’t be easier at the venue, you pull up virtually outside a door on the side wall and its a few steps through into the room.

The room has got a real touch of elegance about it and sounded excellent during the sound checks thanks to the great combination of wood and brickwork. The set up means that you will play across the width of the room, so if your a DJ I would recommend setting up your subs against the wall rather than in the recess and turn them around, this will ensure that the bass hits the wall and bounces straight back onto the dance floor area. You won’t hear much bass from the booth in the recess or in the dead areas each side of the floor but it sounded fantastic on the dance floor area which is exactly where you want to optimize the sound.

The floor is all natural wood and there isn’t a dance floor installed by the venue but it works very well once the tables are repositioned during the turnaround, if you are considering hiring in a starlit floor I would recommend a black one as a white floor may make the dancing area a bit too bright.

We got going just before 930 as we announced the new bride and groom back into the Great Hall to take their first dance as a married couple via hand signals from the best man… although it proved to be a shorter night than most sometimes these nights can be amongst the best, and this was no exception. 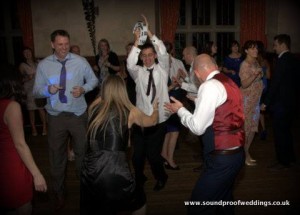 The night will also always be remembered as the birth of “Tambourine Watch”. I had acquired it following Kristin and Jon’s wedding at Northcote House in Ascot a couple of weeks ago after it had been left behind by the wedding party so I decided to take it along to Fanhams Hall as its an instrument that you can incorporate into most music and add a live element to certain songs during performance in a discreet yet effective way… little did I realise how much of a hit this was going to be ! One of the wedding guests clocked it on the booth straight from the outset acknowledging it with a huge smile and thumbs up, after that it spent the whole evening doing the rounds as I played through Nina and Lee’s favourite tunes, it added a fantastic bit of interaction amongst the guests throughout the evening. 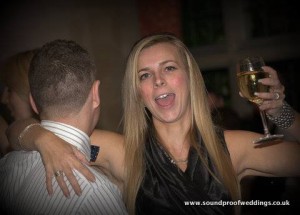 If your sourcing information for wedding venues in Hertfordshire I would highly recommend Fanhams Hall to anyone with its stunning grounds for photos and a great room that not only looks amazing but sounds exceptional. Staff are all really nice and go about things in an unobtrusive friendly manner and there is no sound limiter in the room so no disruptions in that respect. The bar is just across the hallway and the buffet is served from the far end of the room which is closed off during the daytime, it all works smoothly and efficiently.

After a fantastic evening that finished on a real high at midnight we packed up to head back towards the Dartford Tunnel in preparation for tomorrows early start for Gemma & Phil’s wedding in Wokingham…but little did I know what the next the 15 hours would have in store. The first installment of Saturday chaos came about at 1am, we had made it back almost as far as Thurrock with no problem and then out of the blue hit gridlocked traffic on the approach to the bridge tailing back a couple of miles. This was due to the bridge being shut down to one lane so we sat there for about an hour and a half eventually making it back just before 3am… but it was just a drop in the ocean compared to what was going to follow on the M25 later that day… more on this to follow on what turned out to be an epic Saturday.

We wish Nina & Lee all the very best and congratulations on your wedding, thank you for letting us be a part of your special day and giving us a great start to the weekend 🙂 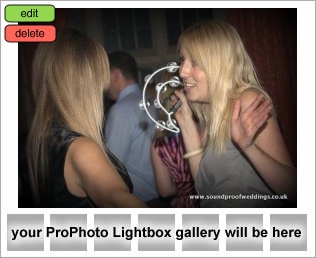