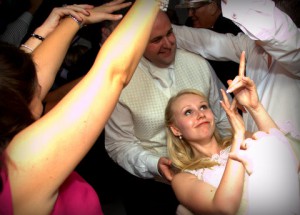 The last word of the weekend fell on Sophie & John’s wedding in the Bearstead Suite at The Marriott Tudor Park, Maidstone ….and WOW what a night, in fact it took a couple of days for the headache and lethargy to subside it was that good …and after the previous night’s shananagans packing up in the rain soaked marquee down at Crockham Hill it really was a weekend to remember for all the right reasons.

I’ve played at The Marriott Tudor Park several times and all the available rooms are excellent party rooms, however I particularly like the Bearstead Suite as it actually does feel quite exclusive despite it being a hotel.  It’s got a very intimate cosy ‘club like’ feel with it’s low ceiling and bar within close range of the dance floor (similar to Eastwell Manor), also the walls are quite neutral which is great as you can really start to transform it.  The room works very well with the marquee attachment, which I have to say had an almost tropical feel to it thanks to the fab heaters installed. We provided background music during the meal which was pretty much a selection of the best music from the Ibiza chillout albums iv got. 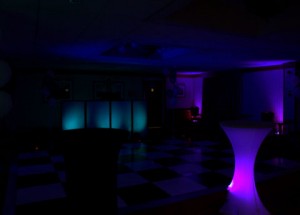 We installed 10 uplighters set to purple to tie in with Sophie and Johns colour scheme which looked great alongside the chequered dance floor and stylish uplit cocktail tables, finally we colour co ordinated the dj booth to blue as a contrasting colour from the purple and we also installed two blue uplighters behind the bar so the room looked very cool indeed.

The music throughout the evening just flowed beautifully from start to finish, John was quite keen for some of his Motown selections early in the evening and a lot of his friends were into their 80s soul so I covered all those genres incorporating the bride and grooms requests into the set as per usual. The majority of guests were aged between 30-40 which is a great age range for people who fully appreciate the last few decades of music, it was also a fantastic testimony to a clearly popular couple that everyone still let their hair down despite it being a Sunday and gave John & Sophie a great send off on their wedding day. With the floor heaving all night it got a bit too much for one reveller who spotted Keeley Webster/Choice camera girl Julia poised with the camera during ‘Sexy & I Know It’  as he stylishly dropped his pants to leave the blushing photographer aghast at his bare faced cheek. I guess that’s my fault for getting them a bit too excited but that’s the kind of things people can do when it buzzing ! Another particular highlight was a great moment as we played Rhianna’s “Umbrella”, as if by magic and for no apparant reason someone plucked an umbrella from seemingly nowhere to the amazement of everyone on the dancefloor, never have so many woman wanted to get their hands on an umbrella before ! 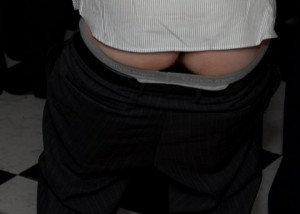 As the end of the night approached the bride made a hasty last minute decision to give Bill Medley & Jennifer Warnes the swerve as the last song and instead that accolade was the pleasure of Montel Jordan as the couple left their theatre via the requested archway, and with all guests still fully clothed that was the end of a wonderful four hours, it just goes so quickly when it’s that good. One final act was still to come though, courtesy of the very customer focused and lovely Sarah who is the wedding co ordinator, following the usual chants of “one more song” I was extremely impressed at midnight that she gave the thumbs up for an encore song, which is very rare these days in venues especially hotels so I thought that was an excellent touch, a great end to a brilliant day and a very happy wedding co ordinator with a whopping sunday night bar bill  🙂 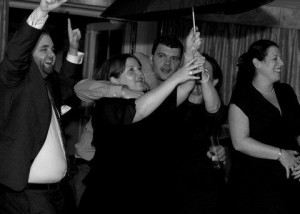 As the bride and groom left via an archway from the floor to the door I wished everyone a safe journey home, or at least back to their hotel room, however I was soon reuinted with them all after being railroaded into to the hotel bar (it didnt take much persuading) and this carried on until around 3am when I found myself taking a palm reading from a psychic who used to run an escort agency and talking to an actress who has been in and out of all the top soaps on the BBC (see there’s never a dull moment).