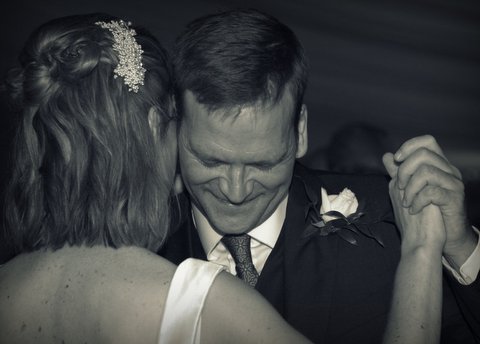 First up this weekend was a tricky to negotiate marquee experience in the beautiful village of Crockham Hill near Westerham for the wedding of Nicola and Andrew set in the picturesque back garden of Nicola’s parents home.

The term tricky to negotiate is a result of learning the hard way from disasters of the past, such as the time when I got stuck in a field after an 18th birthday party. I had driven through it beforehand to get the kit as near to the door as possible, when I finished the gig and came out to load up I discovered it had been raining all night …so you guessed it, en route through the field back to terra firma the van got stuck bang in the middle of the wet grass (one bit of advice – never slow down once you’v actually got your vehicle moving under these circumstances and always keep a piece of carpet in the boot). The outcome was a £300 bill which was more than I earn’t that night, a ruined pair of white shoes and eventually arriving home at 5am much poorer than when I left, tired, soaking wet and covered in mud after relentless failed efforts to free my workhorse ! 3 hours I waited for an Isle of Grain tow recovery company and even THAT big bugger had trouble getting me out !

So when I arrive at Nicola’s family home on a very wet day the flash backs began as I look at the temporary rail sleepers positioned over a little stream to get suppliers into the garden. Once I’m in I then get to learn that the catering truck has already got stuck down the side of the marquee earlier in the day so I decide to unload quick time and get the van outta there asap and into the family car park. This doubles the journey with the kit at the end of the night …but at least I’m guaranteed to get to work at The Marriott Tudor Park on Sunday !

Half an hour and a few skids later everything is out the van and stored at the front of the marquee, I’m back in the van and about to cross the lovely little stream back onto the main road and the wheels start slipping and sliding :/ and before long thats it …game over and the scene is set. 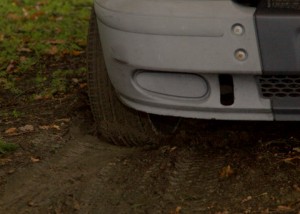 It’s an incredibly damp afternoon, the guy from the catering company is frantically hammering down some temporary carpet from the house to the marquee ready for the guests arrival and there appears to of been so much rain that I think its starting to ooze up through the ground by the river (where I’m stuck in a foot of mud)…it seems pretty obvious that weather wise things can’t possibly improve by midnight and I’m already cursing not bringing some spare footwear. My attention though has now turned to an unforgiving gap between two of the railway sleepers, I’m sure it’s begging me to put one of my wheels between them so that the van ends up dropping 4ft into the stream, however after 5 mins of mind games with a lump of wood and with the help of the carpet guy I’m back out on the country lane where I am most definately intending the van to stay and railway sleepers safely negotiated.

guests during the meal with booth set up and coloured backdrop

The marquee itself is an absolute beauty, (from what I learn during the speeches the marquee is actually sitting on Nicola’s fathers prized tennis court), fair play to Stephen for that. Inside, the huge marquee easily accommodates the 150 guests and we set down the far end installing a lovely pink uplit backdrop on the marquee wall behind the booth, professional moving lighting to the side (out of photo) and a further 10 uplighters down each side to give a nice symetrical look, the marquee looked stunning …Nicola & Andrews theatre is set for the guests arrival.

With the guests due back from the church around 430pm we just had to set up a microphone for the speeches before the pleasure of experiencing 2 hrs of Dixieland thanks to the contribution of “The Ashdowners” – a form of Jazz originating around 1910 I believe. Oh I forgot to mention I got to meet Stephen (brides father) on our arrival who looked remarkably similar to my uncle, not only in looks but in persona  too…during this time I had to admire his bravery as he confidently negotiated the inclement weather to get his daughters three tiered wedding cake over to the table safely without incident.

I mentioned “The Ashdowners”, I don’t have any knowledge of Dixieland myself probably due to my age but they provided the perfect audio backdrop for the drinks reception, however they also made an unforeseen life saving contribution around 6pm …. “Oh my goodness”, “Please Somebody”, “Can you help please”  the Dixieland keyboard player shouted from his seat in front of a Roland speaker jostling his finger in the general direction of the bride and grooms three tiered wedding cake, before long 3 or 4 members of the catering staff raced across the marquee to save the work of art which had just collapsed. Remarkably the top tier, which had completely fallen off had remained on the table and even more remarkably they managed to get the whole thing back together again …and I dont think anyone noticed, In fact don’t even know if Stephen was made aware but if your reading this Stephen how about leaving us a comment and tell us how relieved you must of been not to of been responsible for destroying your daughters wedding cake before the meal  😀 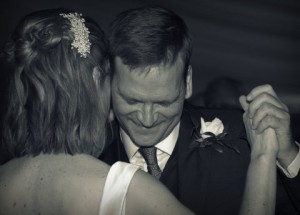 Nicola & Andrew during their first dance

Onto the evening itself I ended up playing background music during the meal with the first dance taking place around 930pm. The evening gets off to a flyer with the huge spanning dance floor packed for the early exchanges until the scheduled firework display took place around 10pm, as the rain continued to pour the guests managed to enjoy this through the relative safety of the marquee windows before we dimmed the lights down and got back down to business for the last couple of hours. The floor remained very active throughout as I played through all of Nicola & Andrews 70’s and 80’s requests, we even had a celebrity in the shape of Evan Davis (host of Dragons Den) on the floor for a considerable time …not a bad dancer either! 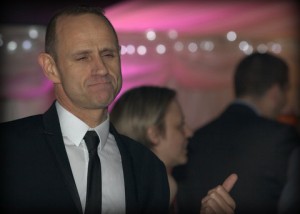 As the rain started to soak through the marquee carpet (there was literally a puddle inside the marquee towards the end) the bride and groom made their departure around 1130pm leaving some of the younger guests to party to some latest charts in the final half an hour, in that short space of time we had four hilarious chaps on the floor who firstly decided that it would be very cool to spend around 30 second’s dancing in their boxer shorts but then followed that up with a rendition of “Back for Good” by Take That, they sat on the chairs mimicking the boy band and even had guests running around lighting candles for effect, it was all great fun and a fantastic end to a memorable day. 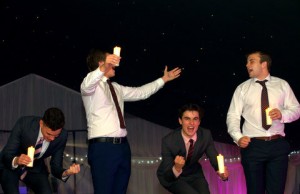 So talking of fireworks, the night finished with a bang ! and as for getting home, well the extended distance from marquee to van ensured it took us nearly 3 hours to pack up and clear out but that’s just the way it goes sometimes …you take the rough with the smooth …and despite the earlier information that it wasn’t going to rain during the evening, it was of course still pouring down outside – but the benefit of hindsight saved us …this time.