After a much needed day off following the four weddings over the weekend (which included Sundays 16hr day SoundProof package) we were feeling slightly rejuvenated for a rare Tuesday wedding … it was quite a late booking with Andrew booking in only a couple of months ago for his wedding to Lucy in the Belvedere suite at Pembroke Lodge, we have reviewed this venue previously which can be seen by clicking here. 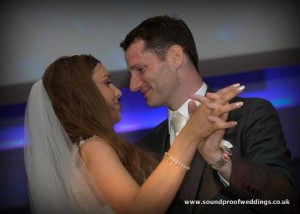 We were on site at around 7pm but with the speeches going over time we didn’t get in till around 730, but its a very straight forward suite to access so once we were in the room we were set up and ready to go within about 45mins following the room turnaround. Andrew had created his own playlist which was a list of around 70 party songs, although the groom did stress before the first dance to go with what I felt best. To be honest he had put together a pretty decent playlist which I guess he knew would be to his guests tastes the only thing I would of changed really would have been one or two on the running order, but I decided to go with his list from the outset as that’s what I had been preparing for …and I was curious to see if it would work, but having done so many weddings I knew that there were good enough selections on the list and the guests were all over it as soon as I kicked off the set around 9pm so no worries at all.

Andrew’s flexible approach on the night paid dividends about a third of the way into the night …as the alcohol started to kick in we had an onslaught on guest requests mainly from Lucy’s mates who were eager to get her favourite song played “Gangsters Paradise”, so we deviated from the playlist and it filled the floor following the buffet, from that point onward’s we went with the flow of the night mixing up the best of the 90’s, R&B and dance dropping in selections from the playlist through till the close, ending on the selected last song. 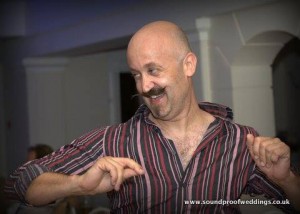 “sexy and he knows it”

This was my third visit to the venue and I’ve had a great night every time, this one was no different …by the end of the night we had the two guys behind the bar dancing (see photos), one guy had his shirt off on the dancefloor and we were railroaded into playing “Sexy & I Know” by the wife/girlfriend of one particular guest who informed us, “play it and he will mince about and turn completely camp”, she wasn’t wrong 😀

Also present on the night were two sisters, one of which I was chatting to at the end of the night as she asked me to DJ at her wedding in a couple of years. She was planning something quite big in an isolated location/field/marquee (wedding plans thoughts at this stage nothing confirmed) …so will really look forward to doing that as those type of weddings are absolutely great (weather permitting).

Whilst speaking to Andrew it really surprised me to learn that the Belvedere Suite had only cost them £750 to hire for the wedding today, its a lovely room and the photo opportunities from the terrace are fantastic …the staff are all excellent and will go out of their way to help you so check out the venues off peak rates and grab yourself a bargain if your considering Pembroke Lodge.

Finally congratulations to Lucy & Andrew, we wish you all the best for the future and your planned honeymoon in 2014.

We’ve got a 3 day break now and then we are back out at the weekend for Katie & James wedding celebration on Saturday at Chelsfield Lakes Golf Club in Orpington before travelling down to the Surrey/Hampshire borders for 90’s Dance fan Gabby’s wedding to Joe at Lythe Hill Hotel. 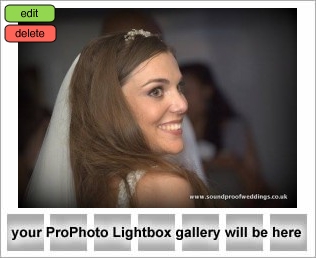 First Dance  In My Life The Beatles