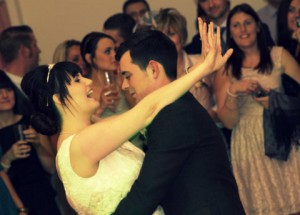 The first dance “Baby I Love You”, The Ramones

We were working only just the once this weekend so the final word of the weekend fell on Louise & Pete’s wedding at the lovely Winters Barns in Canterbury on Saturday night. We sent out an event checklist to Louise the month before the wedding and it seemed from her responses that it was going to be a very mixed bag of music, anything went as long as I worked it my way to ensure the floor was full all night.

The prep involved setting up 10 uplighters, we put 6 set to pink out to the dancing area to make the most of the exposed wood beams and the remainder up on the stage which we set to blue to distinguish between the two areas, this not only enhances the ambience of the barn but it also defines the staged area giving more of a concert type of feel which we did deliberately as a result of some of the bride and grooms indie rock music selections. So once the scene is set its a very ambient room, the staff also light some candles which are quite effective and you have the option to have the venues fairy lights on or off which are on the beams that go over the dancefloor. Personally fairy lights are not my thing but generally on the occasions I have been there previously my clients have tended to keep them on for the first hour or so for the first dance/buffet then turn them off and enjoy the full benefit of the professional lighting we have installed for the last couple of hours.

As far as the barn is concerned from a sound point of view, it has good acoustics helped by the position of the stage, the ceiling height which is quite high and the wood that’s in the room, what you should be aware of and also any DJ that works there is that you HAVE to plug into their sound system. Now from DJ or bands point of view we use our own equipment week in week out which we are familiar with so its not ideal … and of course the reason why the venue provides a speaker system is because the sound is restricted, and that is to just 80db !  this is actually the lowest we have ever come across (if anyone knows of any less can you leave us a comment) but apparantly the neighbours havn’t been very helpful there since they started hosting weddings a couple of years ago and in this day and age venues are understandably taking every precaution to protect their licenses. If your familiar with the entertainment industry then you will appreciate that sounds levels have to be flexible, after all a good DJ is not someone who blasts their horns so loud that its uncomfortable to listen to …you can only fill a space with so much sound before it becomes painful, but we do need to have the freedom to manipulate music without restriction, it’s a part of our profession. If you are a DJ who is more accustomed to not mixing or the type of DJ that uses a pre mixed party CD then the chances are you will be ok. One bit of advice for professional DJs is that if you don’t generally use a monitor for your mixing make sure you use one because trust me when you start playing and there’s a room full of people you will notice how much quieter it is from what you are used to, that extra 20db makes a huge difference – at the end of the day you’ve got to be able to hear from behind the speakers whats coming out of them or you cant work properly! From a bands perspective I did notice in the venues ‘performer agreement’ (which bands and DJs have to sign) that bands cannot use certain types of drum kits and that the venue actually have a synth drum kit that can be provided by the venue …so bands best check in advance exactly what the score is with that if your going to be playing at the venue.

Onto the main event, with the wedding running behind schedule and the first dance not taking place until ten to nine, everyone was more than in the mood to party by the time I introduced Louise & Pete onto the floor as the new Mr & Mrs Simpson to The Ramones “Baby I Love You” followed by their second requested song “Love is in the air”. It was a lively start with a lot of guest requests for older music, in fact at one point I tried to bring it back to the 90s but the requests kept coming for the older sounds so that’s the way the evening went overall, to be honest exactly as I expected when I was setting up the stage …it was all about Rock, Indie and Glam Rock, even the younger guests were loving it. 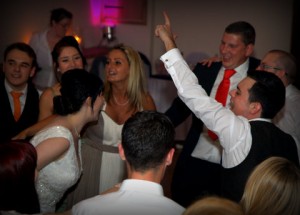 few hits of the mature cheddar variety I ensured the last hour was dominated by Indie, Britpop and Rock with the highlight being the father of the bride rocking to Led Zepplins “Whole Lotta Love” and Queen getting back to back tracks, the evening ended bang on 12 o clock with Oasis “Don’t Look Back In Anger” exactly the way it began with a full dance floor.