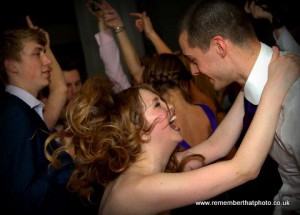 The last week in November produced back to back London weddings, starting here at Liverpool Street for the wedding of Olivia & Theo and then this coming Wednesday a rare midweek wedding just a mile or so away near Smithfield Market.The Andaz Hotel is built into Liverpool Street Station, I had played here a couple of years ago on the 3rd floor for a Christmas Corporate event but this wedding was in Room 1901 which is located on the ground floor, the entrance is in Liverpool Street just off of Bishopsgate. Room 1901 is like a palace, it’s a huge room with 4 stunning pillars encapsulating the centre of the room and a beautiful glass domed roof. The pillars are ambiently lit with Orange uplights and there is a very striking wine bar lit in yellow and orange which forms the backdrop to the top table. 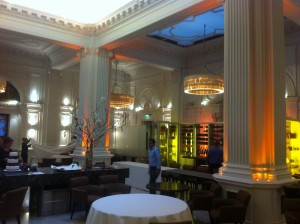 Olivia & Theo had booked me to set up before the meal. Room 1901 is used for breakfast at the hotel so I got access at midday, it was quite a large wedding so there were some space constraints despite the size of the room, I installed a simple plain white booth and cabled up the speakers, it wasn’t the sort of room that would of benefited from an overhead trussing gantry type of rig so for this job I used a few uplighters and 4 moving heads (360 degree floor standing lights), it’s always best to carry numerous different lighting solutions as different venues have a different feel and the right thing to do is to tie in the disco with the room especially at such an impressive room as this one …chic and minimalistic was what we needed to achieve here, not overpowering.Any DJ’s reading this will be very happy to know the following: this function room offers straight forward access and low parking costs, our overheads were pleasingly low thanks to there being no congestion charge on a Saturday, I managed to find a metered parking space right outside the entrance which cost me £2, I could have stayed parked there till 8am on Monday morning.

Anyone who has read through other blogs on this site will know I am a big Charlton Athletic supporter, so the plan of action once set up was complete today was to jump onto the train to Stratford, then Jubilee Line to North Greenwich then jump on a bus to SE7 for the home game against Huddersfield Town. I got down there at 230 but like so many other times at home this season The Addicks failed to send the majority of the 20,000 crowd home happy after conceding an 88th minute penalty to ensure The Terriers left The Valley with a 1-1 draw despite having played the last hour with only 10 men following a red card in the first half.

Following the game I was back at Liverpool Street just after 6, with the wedding running slightly behind time the first dance took place just before 9pm. Olivia & Theo had given me quite an extensive playlist made up from guest requests but with the onus being on incorporating those selections into the feel of the night. I played about half an hour of background music as guests made way for the tables to be cleared from the marble floored dancing area, the sound system sounded absolutely mint and once the lights lowered there was a lovely atmosphere about the room. 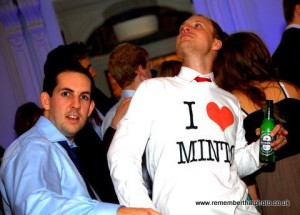 Minto had a great night too

It transpired to be one of those great nights where the time flew by with everyone embracing the music selections and guests responding to their requests being played. Sometimes the system of compiling guest requests beforehand can be quite eclectic depending on the selections but this was one of those nights that rocked and rolled beautifully from start to finish thanks to the crowd, even the venue allowed “ONE MORE SONG” as the clock struck midnight …a truly superb night in London Town.

Here’s the set list from Saturday, if you were at the wedding how about leaving us a comment.