After a Sunday off following three weddings Thu-Sat the weekend ended at one of our regular Essex venues which have reviewed a couple of times previously, Gaynes Park near Epping for Lenny (aka Louise) & Charlie’s wedding. Due to the hectic work schedule I havn’t had a chance to source a new camera as yet but if you were at the wedding and would like to send us a couple then I will gladly include them in the blog – our email address is events @ choicedj.co.uk. 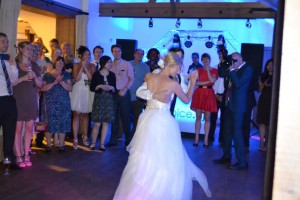 After arriving at 5pm following the speeches I got access straight into the disco room where I met up with a photographer that I had come across recently at a different venue, which is always nice as you start to get to know people in the industry after you have been to so many different venues. Also it’s always nice to go back to Gaynes as it’s one of the few venues where I find the staff turnaround to be very low so there’s always plenty of familiar faces around the place which I think is great for any business.

With the meal taking place behind the curtain I was able to get on with the set up which for DJ’s now takes place at the far end of the room so that the speakers are directed towards the gather barn end, this I believe is to contain the sound better due to local residents.

I had a few conversations with Lenny and Charlie in the build up to this one as like so many other people they are doing this for the first time and wanted everything to be perfect particularly with the choreographed first dance routine and the final song of the night. They shouldn’t of worried though as their excellent circle of family and friends gave their all to party and enjoy themselves and there was absolutely no sign at all of it being any quieter because it was a Monday.

I started slightly later than usual tonight because from 730 there was 80 minute set from a Ceilidh Band which went down very well with plenty of interaction from the crowd, and gave them a green uplit backdrop courtesy of 3 uplighters which looked quite effective despite the daylight. With Lenny keeping her maiden name I introduced them as “the bride and groom” at 9pm to the sexy New York style instrumental anthem “Love’s Theme” released by Barry White’s Love Unlimited Orchestra in 1973, the newleyweds had a choreographed first minute routine to the song and once Charlie gave the “we have run out of ideas eye contact cue” I encouraged everyone onto the floor and everyone willingly obliged, there was nothing reluctant about joining them they literally piled on and gave the couple a first dance to remember.

Lenny had sent through a list of preferred music but gave me versatility to keep the dance floor ticking over but to be honest I pretty much managed to get out all her tunes out and added a few 90’s Hip Hop Classics into the mix before finishing off the set with the Indie tracks on the list culminating in “Loch Lomond – The Hampden Remix” which had a huge impact on the crowd, in fact I only played it the week before and it’s certainly an anthem that goes down a storm if played at the right time.

So that concluded the weekend, 4 weddings in 4 different counties and final congratulations to Lenny and Charlie on their special day. So 3 days now to chill and prepare for next weekend when the camera will be back in action and normal service resumed on Friday then after a succession of venue weddings the last word of the weekend will be at Rachel & Roberts marquee wedding in Aldershot, check back soon for more blogs …and photos