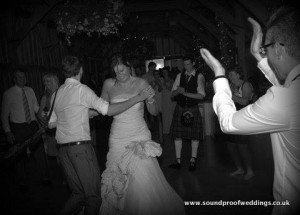 For the third successive year I was out working on my birthday and for this one it was a trip to the South Coast for Kristie & Aaron’s wedding at Southend Barn near Chichester. After last nights cooler evening at Hylands House in Chelmsford there was high humidity in the air as we arrived at the venue after a delay riddled journey.

We always allow 50% extra travelling time for longer journeys and we ended up using the full quota for this whopping 4 hour journey thanks to an accident en route, no need to emphasise on the lack of birthday cheer in a non air-conditioned vehicle stuck on Britains largest car park …the M25 on the most humid day of the year so far.

We were surprised actually on our arrival as to how hot and humid it was in Chichester, definately no evidence coastal breeze for this one, in fact no air movement at all as the guests sought refuge in cold drinks following a stifling afternoon inside the barn for the wedding breakfast and speeches. A member of the management team admitted, “You should of been here at about half past one when there was over a hundred people in here, we were literally soaked” …I guess I was in a better place (whilst the van was moving at least) but as we started to set up we started to get a feel of his comments. 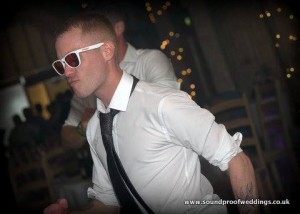 Firstly, its a fantastic large barn …pristine looking on the inside and out, its exclusivity and size certainly make it an appealing choice for small or larger weddings. The courtyard is lovely and there is some great outdoor seating areas under cover complete with open fire which would be great for milder days, there’s also accommodation at the venue. I also noticed a projector built into the barn so I guess you would have the option to use that during the speeches and there is a nice bar at the opposite end to where the disco sets up. Fortunately it’s not often in this country we suffer the kind of humidy present on this particular day so even with the barns glass doors open throughout the duration it was still an extremely hot environment throughout the entire evening and it was only once we had packed up and vacated that we managed to find some air by way of hanging ones head out of the van window like a family dog.

Kristie and Aaron hadn’t really provided a too in depth playlist for this reception so it was a go with the flow kind of night. With sections of the crowd into their hard house scene at one point one partygoer light heartedly declared “we listen to their cheese all the time so let’s have some trance for a while” …it all felt really laid back so that wish was granted as the groom and his entourage basked in the glory of a few of their favourite tunes before new wife Kristie put a stop to that and order was restored as we moved back to more commercial dance music. With the party now in full swing with some of the girls favoured party classic requests going down well, the highlight of the evening unfolded as the Scottish contingent got involved to the epic “Loch Lomond” by Runrig and then “Flower of Scotland” which brought about some interesting moves from Aaron and one other particular guest, who’s dancing to the bagpipe anthem involved wearing a chair on his head lol. 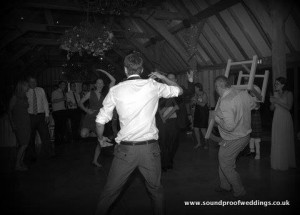 Aaron during his “Flower of Scotland” routine

At the end of a lively last couple of hours never has the sight of a can of R.Whites lemonade been so greatly appreciated as a member of staff very kindly produced one from behind the bar to feed my dehydration …my ecstacy then went into overdrive as he produced three leftover bacon rolls before we regrouped and finished the pack down in anticipation of the drive back, which I’m glad to say only took a couple of hours – however there was a sting in the tail as both iPhones had suffered on the journey down as a result of extended Sat Nav battery draining usage during the delayed journey …meaning no music on the way back …bummer ;(

Congratulations to Kristie & Aaron on their wedding …the humidity on your wedding day will preserve it in our minds forever 🙂 …all the best to you both and we will forward on your photo’s from the evening shortly.

With the weather forecast at 31 for Monday, we have a very short turnaround this week before Bronwyn & Ryan’s wedding reception on Thursday. We are also out on Friday in Surrey, Saturday at a Hampshire Castle and on Monday in Essex …check back soon for more wedding reviews, photos and videos. 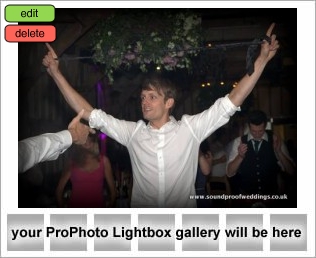