Friday saw us make a return to Clandon Park, a National Trust venue in the heart of Surrey. We hadn’t been here for about 4 years but after the early start it transpired to be another great night in the intriguing restaurant room, a vaulted undercroft of the mansion … 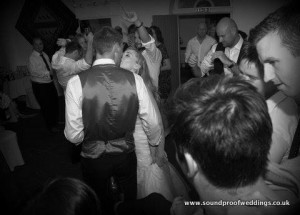 We arrived at the venue at around 3pm giving us a good couple of hours prior to the meal, Kate and Philip had booked our Creative Mood Lighting package which makes a stunning difference to the vaulted undercroft room with it being an all white room.

It’s generally not possible to set up any evening equipment in the room before the meal so all the equipment goes into the room beforehand to be stored for the turnaround after the speeches, however it is possible at this time to set up uplighters before the meal and if its a bright outside then there is the facility to close the curtains to get more ambience out of the coloured lighting.

The room itself is lovely with two arches which make it feel quite intimate, however the ceiling is actually still quite high. The room is technically on the ground level but it does have a vault like feel to it as a result of the arches and the fact that it sits lower than the lie of the land on the window side of the room. One thing that looks really cool in this room is the facility to upgrade to four mirrors, two of which are attached either side of the entrance and the other two either side of the top table. The bar is in the room opposite and keeps everything nice and tight knit throughout the evening. 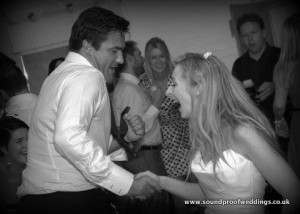 With the wedding running slightly behind schedule we got back into the room at around 8pm as the room turnaround takes place, in my opinion with it being such a lovely room its better to go with uplighters and a minimal set up that doesn’t involve overhead lighting, we considered it but just thought it would look so much better to keep it as natural as possible along with the purple uplighters, so we set up the booth and two uplit plinths mounted with moving lights, we also added a water effect onto the ceiling in the centre which gave the room an extra ambient touch.

As far as it being a room for a party it’s excellent, I have to say out of all the venues I have visited its one of the best sounding rooms without a doubt. If I was going to buy a club then I would want a room like this and the uplighting opportunities complete the feel, with a fair bit of Garage and R&B on the setlist it sounded great.

It also helps when you get a great crowd, we spoke to one guest Andy before the set up who was really looking forward to the evening and he was just one of many people on the dance floor for virtually the entire three hours. He even came up to us at the end and said “it was one of the best disco’s I’ve been to” …comments like that make the job feel extra rewarding.

Kate and Philip are currently honeymooning on Vancouver Island located in British Columbia, Canada and we wish them all the best for the remainder of the honeymoon and the future together, I can’t believe its been nearly a week since.

Tomorrow we are in Middlesex for a Hannah & Tomas’s wedding at Grims Dyke Hotel, check back soon for more photos and reviews. 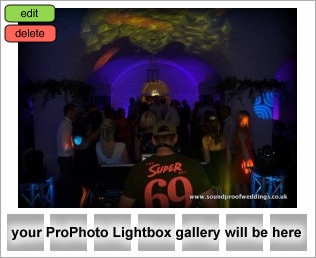