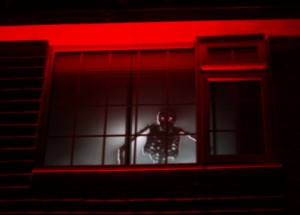 The annual Halloween project at home took place this evening on a windy but dry evening in Cuxton, Medway. Last year I projected animated images onto the brickwork, this year I took it a step further and created a hallowindow using my sons bedroom with professionally created animated sequences.

The way it works is that on the inside of the window you need to cover the window with something like a shower curtain or a white bedsheet, I actually used 2 of my white lycra DJ booth panels which fitted the window perfectly. I had spent the last couple of days creating a video file using a movie editor adding and editing animated scenes which I had purchased from scaremation.com, these included skeletons, ghosts, zombies and a mansion room which gave the impression you were looking into someones living room and came with effects such as bats, spiders, thunder and lightning and spectres moving around the room. 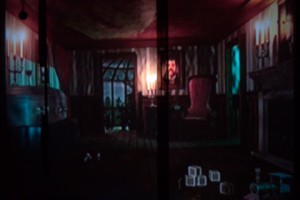 View from the inside of the window showing the lycra panels

The projector was positioned around 10 ft away and this ensured that the whole window was covered perfectly, the projector was linked to a dvd player containing the disc with the video file on and the dvd was then connected to a speaker hidden outside on the driveway to give the local residents and their trick or treating kids maximum effect.

Outside I used 5 uplighters which I use for my Creative Mood Lighting service, these were linked together to a controller so I could change the colour from time to time and also to black out the house when trick or treaters approached the front door, the kids had decorated the driveway with various bits and pieces including cobwebs, gravestones, as well as pumpkins in the window. We also installed a smoke machine at the front door to add to the visitors confusion. 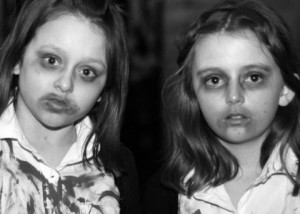 My daughter and her best friend dressed up as ‘dead schoolgirls’, my son was a devil (although he was scared for most of the night) and I was kitted out in all black with a balaclava and a ‘friendly’ skeleton mask.

At one point I decided to go outside and spend half an hour sitting in a chair to do a bit of a live statue routine with a bowl of sweets on my lap. I think the teenagers are the best as you watch them giving it the big one from the bottom of the drive not knowing whether you are real or not …when they pluck up the courage to approach you (very sheepishly at that too) you can hear how scared they become and can’t grab the sweets out the bowl quick enough …and then (start giving it the big one again) when they are safely back at the bottom of the driveway.

The fun started at 530 and I wrapped it up around 730 but once again another fantastic Halloween and the pressures back on to create something different now for 2013 !