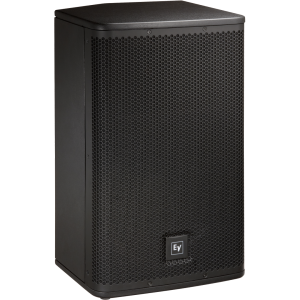 Last Friday I was delighted to receive the latest investment and upgrade to our show, a brand new speaker system in the shape of the EV ELX115P. I did a few road tests on the Friday in the studio but it was only when we got them into the George Vaults in Rochester on Saturday evening that I got my first opportunity to hear them for the first time in a proper venue environment. In fact it was a great run out for them because at midnight the clients paid me to carry on till 2am, so with the first dance at 8:30pm it took their playing time up to 5.5 hours which is a substantial gig.

My first impression out of the box was that they visually are a lovely looking speaker, they look and feel quality. The grill looks expensive, the handles are nice and considering they are a powered speaker they seem quite light. On the back they have a seperate button to give you the option to have the logo light on or off. There are 2 outputs, one with phone inputs and also a link output for connecting to a sub. There is also a button on my pair that give you an option to have a flat/curved sound effect, the difference appears to be minimal as far as music is concerned but the instruction manual advises the it is set to flat for vocal applications, on some of the models this is referred to as normal/boost. Mine also had an interesting smell about them which I detected it the minute I took them out the box, this was picked up on by a couple of the people on Saturday and I’m currently investigating as to whether the boxes they arrived in were used to transport cannabis, failing this the next step will be the open up the speaker itself and check what’s inside them as it’s possible the speakers could be even more valuable than I first thought !

It’s hard to explain to the untrained ear about differences in speakers but for any DJs reading this that are considering buying them then I say do not hesitate and get them because at the price they are they are up there competing with the very best high end speakers on the market, apparantly there are some touring bands that insist on using the EV range, I know The Rolling Stones were one of those and after a few tests on Saturday night I think I understand why they did that. 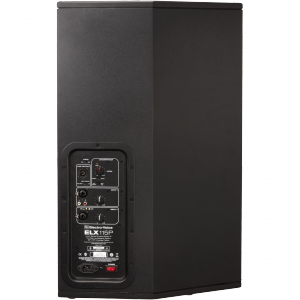 Sloping design for monitor use

The previous system I was using was the Wharfedale Titan 15a powered speakers which I used to get loads of good comments about. They are a good mid range speaker for the money and served me very well for about three years, they earned me money and don’t owe me anything …but at 400watts each speaker I was finding that particularly in the bigger marquee venues I just needed a little bit extra to fill the venue with quality sound. I did also have the Wharfedale Subs which are pretty bulky but what I was looking for mainly was a full range cab with a high quality sound at a louder level for a larger environment, particularly the low end as I was easily clipping the wharfedales when I put more bass into them. So I spoke to Tim at Phase One who are based in Darlington, I’ve always used them as they have always given me good advice and helped me when I’ve needed it over the past 5 years or so. Initially I felt a bit overawed with the price as they were nearly twice as expensive as the Wharfedales (Wharfedale was all I knew), but following a lot of research and conversations with different people I decided to make the additional investment and move into the higher end of the speaker market as when you are out there working in different environments 2/3 times a week you start to notice little things.

Saturday was a rock music based gig, although after midnight I had an hours worth of requests for 90’s house and trance – so over the 5.5 hours I pretty much covered the whole spectrum of music from the past 60 years including Jive, Rock n Roll, Glam Rock, Indie, Britpop, 80s Electronic, Latest Charts, 90s House, 90s Trance. The speakers have a very flat sound which just feels very natural, crystal clear in every respect, I’m sure I even noticed a few instruments in some of the older music that I hadn’t heard before due to the clarity of them, it’s hard to explain but the louder they got the better they sounded …at one point I just had the biggest smile on my face and felt so proud that I had finally worked my way up to such a speaker, 4 years of hard work rewarded. At times during sound checks I felt completely lost in the clarity of them, a similar feeling to having a pair of good quality headphones, a very natural unprocessed sound.

They are 1000watts each speaker, by the time I had adjusted my mixer levels and introduced more bass into them I had an incredible sound punching through the vault and my mixer led lights were hardly registering. I would have clipped the Wharfedale’s long ago and not had anywhere near the sound these were giving me. The vault itself is quite a small room with no wood except a few tables and chairs, it’s all stone and brickwork with a few arches and about 15 foot in width by about 50ft in length I would guess. Sometimes in these sort of places I feel like I end up needing more than in a larger venue which doesn’t really make sense but in a small venue with a lot of people in a smaller space the crowd absorb more sound than in a larger venue.

Footnote: I have since added a pair of 700 watt EV 118P subs to the show to give me even greater flexibilty in larger environments, this takes the total output to 3400 watts giving me enough to accommodating up to at least 300 guests if required …personally I also think a speaker system also looks visually better with the speaker poled to the sub rather than on speaker stands. We also have an additional two EV ELX115P for back up purposes, to cater for even larger events as well as having an option to provide a surround sound situation.