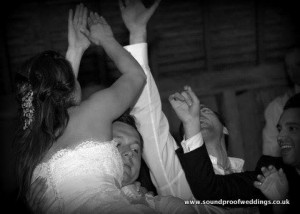 Claudia & Peter at the end

Had been really looking forward to this wedding as The Tithe Barn at Lenham is only licensed to stage 4 weddings per year due to its location in the heart of Lenham, a rural village on the outskirts of Maidstone.

We arrived bright and early on a lovely summers morning at the barn just after 930am and caught up with groom Peter who was applying some finishing touches to the transformed barn, we also got the opportunity to meet the owner Martin, a thoroughly decent chap in explaining that the finish time was 1130 with the level of bass having to be monitored due to a previous problem with a band that caused them a few problems with local residents, completely understandable when you consider it’s an owners livelyhood at stake. We took that all on board and there were no issues during the evening and the music was played at a decent level, more on the disco later on, main reason for the early arrival was that the barn was due to be used by the wedding party from 1pm onwards after the wedding which was being staged at the church right next door.

Claudia & Peter had hired 16 uplighters, 8 to be installed in the recesses and on the brick wall in the meal section of the barn and a further 8 to be installed at the disco end. They had hired in a draping company to create a reveal section where the disco was set to take place and we under instructions to ensure that there was no lighting in that section of the barn during the day. The chequered dance floor was an important addition which really set off that end of the barn …and with the bar also at that end, additional raised dancefloor, booth, arch, uplighters and draping the bride and groom really nailed it transforming the blank canvas into a stunning wedding environment.

We finished the set up just after midday and left the barn with the church bells ringing out in anticipation of Claudia & Peter’s wedding as guests started to arrive in Lenham for the ceremony. The video above shows our arrival, a photo of the barn as a blank canvas …then the transformation with the uplighters. Also included is the set up of the dj booth, arch, disco highlights and reaction from Claudia at the end of the night. 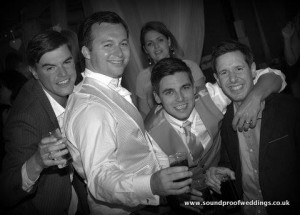 We arrived back at the venue around 6pm, an hour before the scheduled first dance. Claudia had arranged a lovely surprise for Peter’s great Aunt & Uncle following their first dance, it was a pre-arranged idea designed to a hand over her bouquet as a gift to them, so as “L.O.V.E” by Nat King Cole played I had to eliminate couples who had been married less than 24 hours (Claudia & Peter’s cue to leave the floor), then couples married for less than a year, 5 years, 10 years and so on until it left the oldest married couple on the floor …this left Peter’s great aunt and uncle who had been married for an astonishing 62 years (June 30th 1951) and as planned following the song the bride presented them with her bouquet. 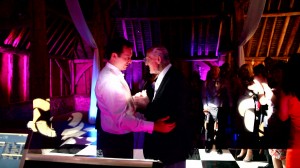 I don’t think I’m aware of any other couple having been married for that length of time but it was an extremely thoughtful thing to do and a touching moment as Peter hugged his great uncle amidst the applause from the guests. That moment is covered on the video and from then onwards it was a summers night that never stopped until the close and a wedding reception that went so quickly.

The range of music to suit all the guests was perfect with Claudia also providing me with a 30 minute set of Latin music to accommodate her side of the family which went down superbly. At the end of the night Claudia summed it all up in the video by declaring “the floor is trashed and my dress is trashed, it’s the way it should be”, those words said it all.

We loved every minute of this one, a truly great day at a fab venue with great people …a beautiful endearing bride and not to forget new husband Peter who gave me a huge piece of stilton which he cut for me before the newleyweds left to embark on their honeymoon …unfortunately I left the stilton on the windowsill in the van and when I went out the following morning it had melted into the wrapper 🙁 leaving a rather pungent smell in the vehicle on a very hot Sunday morning,  I didn’t realise that cheese could literally melt so quickly in the sun. 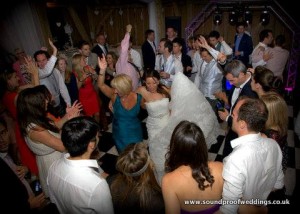 So final congratulations to the new Mr & Mrs Lovelady, have a great “mini-moon” with your pals in Mallorca and all the best for a great future …it was a perfect day and a pleasure to assist in helping it all come together for you both.

Next week we are on our travels to Hampshire (Sat) for Rachael & Michael’s wedding day then on the Sunday a trip to Hastings in East Sussex for Zoe & Nicky’s reception, they actually live in Holland but are staging the wedding in the UK.

Check back soon for more reviews and photo’s of the ongoing wedding season. 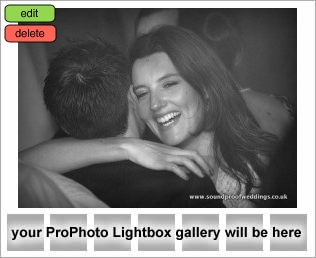