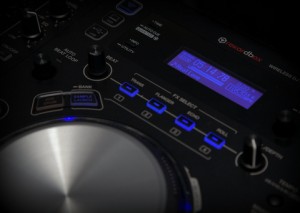 Following on from the review of our latest DJ Booth comes the news that we are now using the worlds very first wireless mixer …the Pioneer XDJ-Aero. It’s a piece of hardware that will literally blow your mind with the on board technology, we used this for the first time on Friday at a local private function and it works seemlessly in conjuction with a free app called Rekordbox.

DJ Phil Webster said, “For the past 3 or 4 years up until last weekend I was using Virtual DJs MP3 mixing software alongside the Pioneer MEP7000 & DJM500, then I read about this piece of equipment and had the urge to give it a try. I know lots of mobile DJ’s out there that are still reluctant to ditch CDs in favour of MP3, but times have long moved on and this is a whole new level as far as digital music is concerned.

This mixer actually generates its own WI-FI network enabling you to connect a laptop, iPad or iPod to it, you then open the app and transfer the MP3 files from Rekordbox wirelessly to the mixer ! Clever stuff you may think, but there’s more great news …this mixer has some other great features that offer peace of mind and many back up options in the event of laptop failure. There is a USB connection allowing you to play files from a memory stick or hard drive, you can then access the files on the mixers LCD screen, however its not a great way to search for music quickly …so get this, as long as your stick or hard drive is connected to the mixer you can actually access its contents by connecting your iPad or iPhone to the mixers wi-fi network ! That’s right, you can actually not have any music on either device yet you can gain access to all the music on the device plugged into your USB port courtesy of the Rekordbox software. I use a Mac and touch wood its been very reliable for me, but it’s great to know that if anything went wrong with it then I can then start using other devices immediately and have that same flexibility and library of music to choose from meaning that the gig doesn’t stop and nobodys any the wiser. I just continue to load the music onto the mixer via the app on the phone or iPad and use the mixer in its normal way”. The mixer also can be used as a midi controller with a laptop so there are numerous ways of getting music onto the XDJ-Aero, it is also compatable with iTunes and has a bridge feature which allows you to access iTunes playlists …at the end of the night Rekordbox also gives you the option to save the history of the set list you have just played and you can also record your set directly to a connected hard drive. 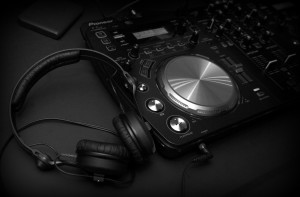 Phil added, “I tested this rigorously for two days before its debut on Friday as I was a bit paranoid relying on wireless technology to play at a function but it worked beautifully and it gained my confidence immediately. I took along another mixer as a back up but on the night I needn’t of worried, it didn’t let me down and I cant wait to get it out at my next wedding.

Once the music is on the mixer there are some great features to add plenty of depth and creativity to your mixing. Each deck has a number of built in effects, “Trans”, “Flanger”, Echo” and “Roll” as well as a fantastic Filter effect (my favourite so far), in addition to that there are 4 sample effects such as Scratch, Horn, Siren and Laser which are triggered by the fantastic touch sensitive wheels of steel. The XDJ-Aero also has a headphone channel for monitoring each deck as well as sync, auto beat loop and trim buttons. The build quality is fantastic, the faceplate and buttons are of the usual Pioneer high standard and the microphone output is excellent with an EQ button to make adjustments. 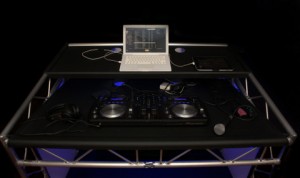 Something worth pointing out that took me a while to fathom out was how to play a continuous set of background music without having to keep loading tracks onto the mixer. You will need to prepare a playlist in Rekordbox then load the first song to the mixer, you then press the auto mix button and leave the cross slider in the middle …Rekordbox will then keep loading the songs onto each deck of the mixer in the order that its been prepared on the playlist, you can overide it by changing a track by adding it manually if you want but then it will revert to the original order if you leave to play background music for example.

On its test run it was a night of older music at a 50th birthday party so I didn’t really get a chance to get the most out of the built in effects but I’m really looking forward to using with latest charts and dance music. If you have any questions about this mixer feel free to ask or you can contact Tim & Mike at Phase One who sell the product and offer great after sales care.