After last nights 11pm finish at Chiddingstone Castle I was back out on the road at 11am for my first ever visit to Wotton House in Dorking, Surrey for Caroline & Steven’s wedding. Unfortunately over this weekend photos are at a premium due to me being in the process of seeking a replacement camera (excluding Saturday) so if you were at the wedding and would like to send us a couple then I will gladly include them in the blog – our email address is events @ choicedj.co.uk 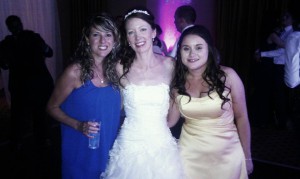 I arrived in Dorking after a fairly decent M25 trip at 1pm which was bang on schedule and immediately met up with the lovely Jessica who was co-ordinating Caroline & Steve’s wedding in the The Evelyn Suite, first thing I noticed was that the room was air conditioned which was very much welcome as the great weather continued.

Jessica who had been working as a co-ordinator at the venue since last October told me that The Evelyn Suite is one of a staggering 44 rooms at the stunning country house 300 acre venue that can be used for wedding and corporate events, which surely has to make it one of Surreys largest venues. Intrigued as to what else the venue had to offer I had a quick look around the venue at various different points throughout the day and was staggered by the multitude of stunning photography opportunities the venue has to offer which included: the grand driveway, a pond with a roman pillared backdrop which can be used for outdoor ceremonies, a raised piece of land which has the entire venue as a backdrop plus rolling views of the Surrey countryside and the breathtaking indoor ceremony room, surely one of the most beautiful rooms you could ever hope to get married in and an absolute must for creative mood lighting with uplighters onto the pillared aisle. 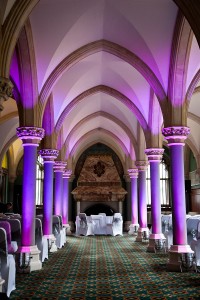 For DJ’s visiting Wotton House, the access isn’t too bad …you pull up on the gravel path adjacent to the courtyard by the Evelyn Suite, once your in its about 20 metres into the room, inside the room there is a sound limiter installed but apparantly this wasn’t working on this occasion, however there is no warning system it’s just a red light that comes on when the power trips so that’s worth investigating if you are playing there. Also the venue don’t allow the use of haze/smoke so a small simple set up would be the best way forward but tbh with the starcloth and the general style of the room a minimalistic set up suits the room better anyway. 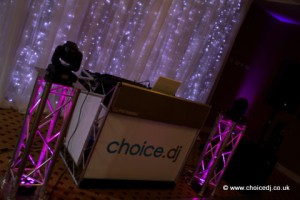 set up in the evelyn suite

Inside the Evelyn Suite was a plain dancefloor complete with huge starlit backdrop which I set up in front of with a couple of uplit plinths. With it being quite an intimate afternoon (around 40 guests for the meal), the disco area was seperated from the wedding breakfast part by some draping which gave the room a nice wedding feel. Caroline & Steve had provided an extensive selection of music to cover the day and evening so I broke it into two appropriate sections for each part of the day, I also installed a microphone near to the top table for the speeches.

The bride and groom selected the first 3 songs of the evening and then after the gorgeous smelling buffet had been served at about 930 the party kicked off with some slow requests for some of the older couples to get up and dance to before Caroline and her friends enjoyed an hours worth of the pop on her playlist and then for the final hour the groom and his mates enjoyed the Indie/Rock selections.

I wrapped things up on the stroke of midnight with Caroline & Steve’s final song before I bid good night to everyone and once the room was clear the staff began the transformation of the room for Saturdays wedding at the venue. Congratulations to the new Mr & Mrs Taylor, thank you for your kind words at the end of the night and we wish you all the best for the future.

Make You Feel My Love Adele
Beatles – Norwegian Wood Beatles
Got To Get You Into My Life The Beatles
Beatles – Blackbird Beatles
When the Night Feels My Song Bedouin Soundclash
You’ve Got a Friend Michael Jackson
Something In the Way She Moves James Taylor
Put Your Records On Corinne Bailey Rae
How Sweet It Is (To Be Loved By You) James Taylor
Warwick Avenue Duffy
Your Song Ellie Goulding
Tonight the Streets Are Ours Richard Hawley
Once Around the Block Badly Drawn Boy
Better Together Jack Johnson
BBC James Walbourne
Coles Corner Richard Hawley
La Cienega Just Smiled Ryan Adams
Cannonball Damien Rice
Going Home Jon Allen
I See Monsters Ryan Adams
A&E Goldfrapp
Next to Me Emeli Sandé
Beneath Your Beautiful (feat. Emeli Sande) Labrinth
I Want You Bob Dylan
Tangled Up In Blue Bob Dylan
Ruby Tuesday (Mono Version) The Rolling Stones
You Can’t Always Get What You Want (Single Version) The Rolling Stones
Son of a Preacher Man Dusty Springfield
Somethin’ Stupid (with Nancy Sinatra & Nancy Sinatra) Frank Sinatra
High and Dry Radiohead
I Can’t Explain (Artificial Stereo Version) The Who
Tears Dry On Their Own Amy Winehouse
Changes David Bowie
Drifting Away Faithless
One Day Like This Elbow
First Day of My Life Bright Eyes
End of a Century blur
Let There be Love Oasis