Last weekend saw us notch up another four weddings in four different counties across the south. On Thursday we were at one of our regular Kent venues where we are recommended, Chiddingstone Castle for Ryan & Bronwyn’s wedding. Unfortunately over this weekend photos are at a premium due to me being in the process of seeking a replacement camera (excluding Saturday) so if you were at the wedding and would like to send us a couple then I will gladly include them in the blog – our email address is events @ choicedj.co.uk 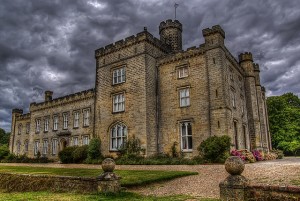 Ryan booked us at very short notice around the start of July for what proved to be another lovely summer’s day 2013 wedding  with the heatwave continuing across the south of England. We arrived at the castle just after 6pm and gained access at 715pm following the speeches. Previously at Chiddingstone the equipment would go in through the front door but they have since changed things and it is now via the rear courtyard which means kit can be assembled by the emergency exit before moving it into the room during room turnaround time which makes things a bit quicker.

Rock fans Ryan and new Australian wife Bronwyn were running slightly behind time, but we were ready to go by 815pm and played some background music until the newleyweds were ready to take their first dance at 9pm following an entertaining slide show presentation by one of the ushers, Bronwyn and Ryan are certainly a much travelled couple judging by the photos.

With Chiddingstone weddings ending at 11pm (an extension can be applied for if required) it was a relatively short evening compared to most but like a good firework display we went for a high impact start with the songs on their playlist and cracked straight into their love of Rock music after a few floorfillers to get things going. With a large contingent of Australian guests the highlight had to be a foursome of Aussie hits that I put together midway through the evening featuring ACDC, John Farnham, Men at Work,Inxs & John Farnham.

At the end of an excellent couple of hours I mentioned to Ryan that I noticed them both up on the gallery level that overlooks The Great Hall, I think Ryan was removing the garter much to the amusement of guests but he told me, “Bronwyn and I wanted to spend some time standing up there top looking down on everyone really our reception but in the end we had to come down because we were missing some great tunes” …

I gave the guests the opportunity to choose the last song as I had nothing official lined up and a few mentioned ‘Gangham Style’ so I went with that …a chance for some silliness before the close and with the usual chants of “one more song” ringing around the room the wedding co-ordinator very kindly allowed an encore so I picked Aerosmith’s massive power balled “I don’t wanna miss a thing” from the playlist to ensure a loved up ending on the dance floor.

All the best the very likeable couple Bronwyn & Ryan on your marriage and future together. Tomorrow we are at Wotton House, Surrey for Caroline & Steve’s wedding before Saturdays huge uplighting job at Highclere Castle, Berkshire (home of Tv series Downton Abbey) and then on Monday we finish the weekend at Gaynes Park in Essex.

Encore I Don’t Want to Miss a Thing AeroSmith